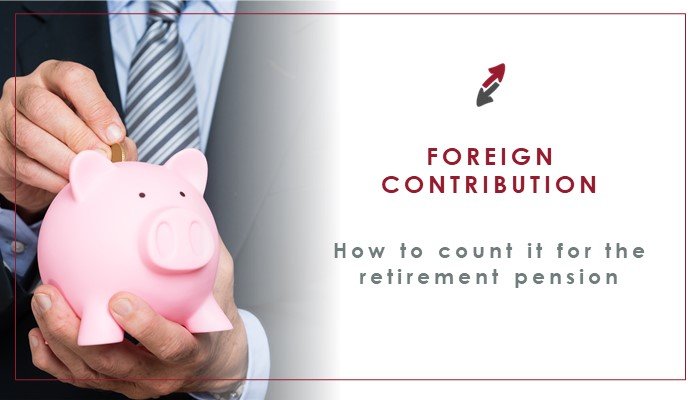 In the European Union, the possibility of pooling retirement pensions is regulated by Community Regulations, but outside the EU, the possibility of collecting several pensions will depend on whether there is a legally binding and signed bilateral agreement that specifically allows the contributions made to be taken into consideration (Spain has signed bilateral agreements with Argentina, Australia, Brazil, China, Morocco and Russia, among others).

If, on the other hand, you have worked in several countries between which there is no regulation or a signed bilateral agreement, we regret to inform you that part of the time contributed abroad will not be reflected in your retirement pension.

If you know that in the countries where you have worked a Community Regulation or a bilateral Agreement is of application, the first thing you must bear in mind is that you will have access to the respective retirement pensions when you have reached the legal retirement age in each country.

In this regard, in Spain, in order to qualify for retirement, two general requirements must be met:

In relation to the contribution abroad, the legal age to receive the retirement pension must be met, in accordance with the legislation corresponding to each country.

COMPUTATION OF THE CONTRIBUTION PERIOD IN THE DIFFERENT COUNTRIES: THE TOTALIZATION OF CONTRIBUTIONS AND THE PRO RATA

If you know that in the countries where you have worked a Community Regulation or a bilateral Agreement is of application and that you have reached the legal retirement age in each of the countries involved, one shall determine how the years contributed in each country are computed and how pensions are paid, with the totalization of contributions, always taking into consideration the pro rata and the EU equivalent rate.

In this regard, the calculations to be made by the corresponding institution in each country to pay the pension at retirement age for a person who has worked in several countries, are as follows (paying the higher of the two pensions):

A person who has worked and paid Social Security contributions in Spain for 10 years and in Germany for 30 years (40 years in total) reaches the legal retirement age in both countries.

On the other hand, Germany shall calculate it in the same manner. This entails calculating the German pension as if the worker had contributed the entire 40 years in that country, thus Germany would pay 30/40 parts of the retirement pension which entails the part proportional to the years worked there.

WHY ARE THE TOTALIZATION OF CONTRIBUTIONS AND PRO-RATA USEFUL?

The totalization of contributions abroad is useful to help workers meet the necessary requirements to collect a retirement pension in the different countries in which they have worked.

As we have mentioned, in Spain, to qualify for a retirement pension, a worker must have contributed for a minimum of 15 years. Therefore, a worker who has contributed for only 10 years, as the exampled above depicted, would not be eligible under the Spanish scheme to receive a national retirement pension. However, having worked in other countries, the national pension will not be calculated with purely Spanish working time, but rather the years worked in other countries (in the example, 30 years in Germany) will also be considered, thus the entitlement would be recognized and a pension proportional to the years worked in Spain will be paid.

Nonetheless, continuing with previous example, if the German requirements for the entitlement to a national pension are met, regardless the period you have contributed in Spain, Germany will also have to calculate the national pension. If this pension is greater than the 30/40 calculation, it will pay the national pension, not the pro rata.

If you live in Spain, you will be able to collect the respective retirement pensions to which you are entitled, in our country.

If you have worked and contributed abroad during your professional career and you want to know if you are entitled to receive a retirement pension in one or several countries, or if you have doubts about the totalization of contributions and what part you are entitled to be paid by each country, it is advisable to consult a specialized retirement lawyer. You can contact our lawyers here.