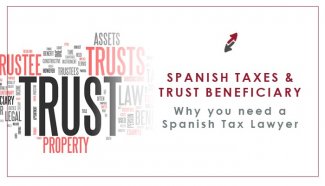 As estate planning tools, trusts are part of the legal culture in common law countries, but chances are that they become a headache to Spanish resident beneficiaries. If you are a Spanish tax resident and are or might be appointed as beneficiary of a foreign trust, you may want to have an insight into the complexity of tax rules pertaining this institution in Spain. Ultimately, you would realize that assistance from a Spanish tax lawyer would be critical to avoid tax exposure.

Trusts are a widely used legal institution in common law countries, mainly set up to easily pass assets on to the next generation avoiding the hurdle of probation, to provide for children or grandchildren’s tuition, or guarantee family assets management and protection. However, it has often been used by Spanish tax residents as tax deferral tools, rising suspicion by the Spanish tax authorities to a perfectly honorable institution as widely used in the U.S. and Great Britain as last wills are in Spain. This questionable use blended with a largely wrong understanding of trusts and their rules by the Spanish tax authorities ended-up in the development of an erratical and sometimes inconsistent tax treatment based on disregarding their existence at all effects.

The consequences of this statement are also the five reasons why you need a Spanish tax lawyer:

1. Direct ownership of the assets

Because the trust’s mere existence is disregarded for Spanish tax purposes, beneficiaries are considered direct owners of their pro-rata share of all of the trust’s assets. Your Spanish tax lawyer will have to analyze the settlement agreement in depth to conclude on when ownership is being passed on to the beneficiary for Spanish tax purposes. In general, ownership will be considered to have passed on at the time of appointment and recognition by the trustees of the individual as beneficiary, therefore acquiring the power to “dispose” of the assets. Whether this event takes place during the settlor’s live time or upon his/her death will determine if it qualifies as gift or inheritance, being taxed accordingly.

2. Gift or Inheritance Tax will be due

Gift Tax or Inheritance Tax will be levied on the fair market value of the assets at the time of accrual (when ownership is passed on). Kinship between settlor and beneficiary is critical in assessing the beneficiary’s tax liability: the closest the kinship, the more tax credits and allowances, and the lower tax rates.

3. Income tax liability even if no distribution

The beneficiary is deemed to have received the pro-rata share of all and every income derived by the trust, regardless of any actual distribution having been made. Thus, the beneficiary will be liable for Spanish income taxes regarding this income. Although your tax lawyer will advice on whether any of the trust’s expenses can be deducted to reduce your tax liability, most of the trustee’s fees won’t qualify, and you will be facing a tax payment on the trust’s gross income, even without any money having been actually transferred from the trust into your bank account.

Spanish tax residents must report all their real estate properties and financial assets by annually filing “Modelo 720”. Because the beneficiary is deemed owner of the trust’s assets, “Modelo 720” must include all reportable assets in the trust. “Modelo 720” is, without any doubt, the most complex, burdensome, tricky and tedious of all tax forms in the Spanish tax system, and tax exposure for inaccuracy or failing to file the form is extremely high. If assistance from a Spanish tax lawyer is highly advisable in general to correctly complete this form, it becomes a must for beneficiaries of foreign trust.

5. Not reporting, not an option

Failure to report the trust’s assets and income have specific and expensive consequences including, but not limited to, (i) the market value of the assets being subject to income tax at marginal rates (up to 47%) and reported in the tax return corresponding to the last tax year opened to tax audit, and (ii) penalties of up to 150% of the tax due.

As Spanish tax lawyers specialized in trusts, we can help you mitigate the effect of these burdensome rules by working together with local advisors in the settlor’s estate planning; provide guidance on tax effective trust distributions; advise on tax compliance; and assist with the voluntary disclosure of non-reported assets and income from trusts. Optimizing your tax position and reducing your tax exposure linked to these entities will be our goal.