Procedure in union elections: How to elect workers´representatives in a company in Spain 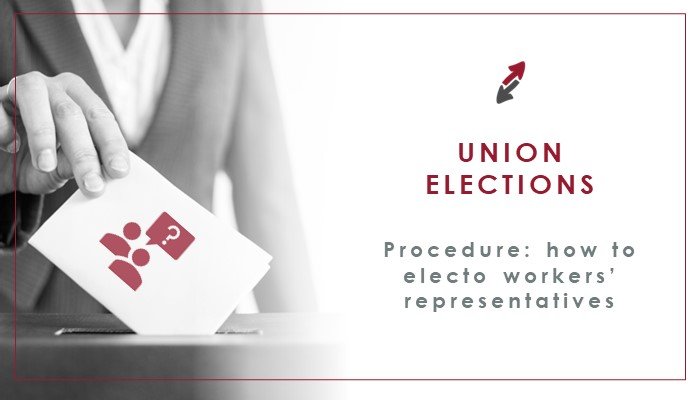 In substance, when we refer to the trade union procedure, we are alluding to the proceedings followed to elect the workers who will then function as personnel delegates and members of the Works Council, besides representing the workers in the company.

Furthermore, throughout the trade union process, it is advisable to seek the advice of a labor lawyer in order to comply with the procedural prerequisites, together with avoid a declaration of nullity of the procedure, given the multitude of incidents that can occur in the trade union election process and the possibility of preventing them by consulting a lawer.

In this context, the rules that regulate the electoral process in a company are both the Workers´ Statute (Articles 69-76), in conjunction with the Regulations for elections to the body representing the laborers in the business.

Those entitled to promote trade union elections are the labor union organizations, whether they are the most representative ones or those with at least 10% of representatives in the company, as well as the workers themselves (by majority agreement).

Hereby, the question on which are these most representative trade union organisations arises. In the case of Spain, on behalf of the number of union members, the greatest associations are CCOO (Confederation of Worker´s Comissions), and UGT (General Worker´s Union). Following, USO, CSI-IF and CGT are the minority unions which can be identified.

Extensively, trade union organizations promoting trade union elections must notify the company and the public office of the labor authority about the intention to hold elections at least one month before the start of the balloting; such communication must mention the company and the workplace as well as the date of the start of the election process (which will be the date of the constitution of the polling station).

Alongside, when elections are promoted to renew representation on account of the expiry of the mandate, such promotion may only take place from 3 months prior to the termination of the latter.

In this regard, the company has a series of obligations deriving from the promotion of elections, among which we include:

INITIATION OF THE ELECTORAL PROCESS: THE CONSTITUTION OF THE POLLING STATION

In the company or workplace, 1 polling station shall be set up for each college of 250 electors (with the right to vote) or fraction thereof.

The polling station is composed by the president (the most senior worker), and 2 members, or vocales (the oldest and youngest voter). The youngest elector functions as the secretary. The posts of chairman, member and secretary cannot be renounced. The members of the polling station may not be candidates for election as employee representatives.

Additionally, each candidate or candidacy, if applicable, may appoint a scrutineer per polling station, who is allowed to participate in the deliberations with voice but without vote, besides making claims and protests, acting as a guarantor of the electoral procedure with regard to the voting and counting of votes.

By the same token, the polling station shall oversee the entire electoral process, preside over the voting, count the votes (scrunity), draw up the corresponding minutes, plus resolve any complaints that may arise.

WHICH WORKERS HOLD THE RIGHT TO VOTE AND WHICH ONES TO BE ELECTED?

Workers over 16 years old who have been with the company for at least 1 month, both Spanish and foreign, are empowered to vote.

From another perspective, worker´s representatives may be elected if they are over 18 years old and have been working in the company for at least 6 months, whether Spanish or foreign.

Candidates can be presented by legally constitued trade unions, coalitions formed by 2 or more labor unions, and a number of signatures of voters from the same centre and college, if applicable, equivalent to at least 3 times the number of seats to be filled. If the candidates fulfil the conditions of eligibility and have sufficient endorsement, the presiding board shall proclaim the candidacy.

Necessarily, workers shall elect their representatives by free, personal, secret and direct ballot. Voting will be carried out by placing ballot papers, identical to each other, in closed ballot boxes.

Each worker entitled to do so may vote for a máximum number of candidates equal to the number of posts to be filled from among the proclaimed candidates.

Voting shall take place at the establishment or place of work and during work hours. If a voter foresees that he/she will not be at the place where he/she is to vote on the voting date, he/she may cast his/her vote by post.

NUMBER OF REPRESENTATIVES TO BE ELECTED

Further, in companies with more than 50 employees, Works council members shall be elected as follows:

COUNTING OF THE VOTES (SCRUTINITY) AND DESIGNATION OF THE ELECTED REPRESENTATIVES

Immediately after the ballot has been held, the polling station shall publically count the votes; this is done by the chairman through the means of reading out the ballot papers.

After the votes have been counted, the results are attributed differently depending on whether staff representatives or works council members are being elected. In staff delegate elections, the seats are awarded to those candidates who have obtained the highest number of valid votes, since the lists are open.

Those elected shall selected by a majority (highest number of votes), and in the event of a tie, the candidate with the most seniority shall be elected. Blank votes shall not be taken into account in the attribution of representatives to each list.

The record raising shall be taken from the results of the vote count, including any incidents and protests. The record shall be signed by the members of the polling station (chairman and members), the interveners and the representative of the employer. Subsequently, the polling stations of the same company or work center shall hold a joint meeting and shall draw up the records of the overall result of the vote.

The result of the voting shall be published on the notice boards within 24 hours of the completion of the drafting of the records.

The original copy of the records, together with the invalid or contested votes, and the records of the constitution of the table, shall be submitted within 3 days to the public office under the labor authority, by the president, and after 10 working days from the publication, he shall proceed or not to the registration of this document.

The refusal to register the records may be challenged before the labor courts, and other challenges in electoral matters shall be processed in accordance with the arbitration procedure.

Whether you are a company or an employee, we reiterate the significance of having the advice of a labor lawyer throughout the union election procedure, in order to comply with all due procedural requirements and avoid the declaration of nullity of the process. For this reason, in order to advise you during the union election procedure and to solve all your doubts, you can contact our lawyers here.