Salary reductions as an alternative measure to the application of ERTE 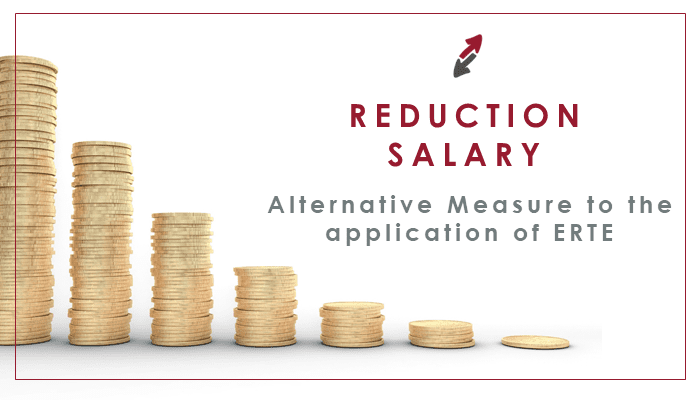 Due to the situation created by the Coronavirus pandemic in Spain, a series of measures granted by the Government have been implemented in order to facilitate the survival of companies in such extraordinary moments as this.

We are seeing the flood of ERTE that have been applied and the volume of workers who have been forced into unemployment. Although the ERTEs are a suitable legal solution in most cases, it is not a simple process. They imply costs and management problems for companies and sacrifices for workers.

As an alternative measure to suspending employment contracts or reducing working hours, we find in Article 41 of the Workers’ Statute the possibility of substantially changing working conditions. These changes include, among others, the possibility of reducing salaries, fixed in the employment contract, in collective agreements or enjoyed by virtue of a decision taken by the employer. There must be proven economic, technical, organisational or production reasons for the justification of the measure to be valid.

Following the doctrine of the Supreme Court, the company does not need to be in a negative economic situation in order to be able to adopt justified salary reductions. It is sufficient for the company to justify the measure on the grounds that it favours the competitive position of the company or the efficiency of the service provided by it.

Therefore, in the scenario of Covid-19, or even post Covid-19, even if it has not recorded losses, a company could reduce the salaries of the staff and thus reduce fixed costs.

How can the wage reduction be carried out and what are the requirements?

The procedure to be followed will vary depending on whether it is an individual or collective change.

The modifications will be considered collective when, within a period of 90 days, affect a significant number of workers, depending on the size of the company.

The decision of reducing wages collectively must be preceded by a period of consultation with workers’ representatives. This consultation period shall not exceed 15 days and shall be negotiated in good faith with the view to reaching an agreement.

After the consultation period, the employer shall notify the employees the salary change. In the event of an agreement between the parties, there shall be grounds for doing so. The decision can therefore only be challenged before the Courts in case of fraud or an abuse of rights. If, however, an agreement is not reached after the consultation period, the decision on the reduction of wages may be taken by the employer and shall take effect within seven days after its notification. This decision shall be subject to challenge in a collective action.

If, in the reference period of 90 days indicated, the affected workers are below the thresholds set out in the Law, the process will be simple. The decision of modifying working conditions individually must be notified by the employer to the worker concerned and his or her legal representatives at least 15 days before the date of its effectiveness.

What rights will the worker affected by a wage reduction have?

Regardless of the nature of the measure, whether individual or collective, the worker affected by this measure shall have the right to:

From a practical point of view, the wage reduction measure is a cost-saving measure for companies, easier to manage than an ERTE. By maintaining employment, workers are more open to agreeing on this measure than an ERTE, which is certainly more traumatic. Important aspects must also be considered, such as the fact that there is no obligation to ensure that employment is maintained, nor the legal risks of a review of the ERTE process by the Authority. There is also no need to negotiate with the Trade Unions if there are no workers’ representatives (as this can be negotiated with ad hoc committees).

In conclusion, it is possible to consider the reduction of the salary of the workforce as an alternative to the ERTE. It is an effective way of maintaining workers’ employment by adapting to the difficult situation we are living.