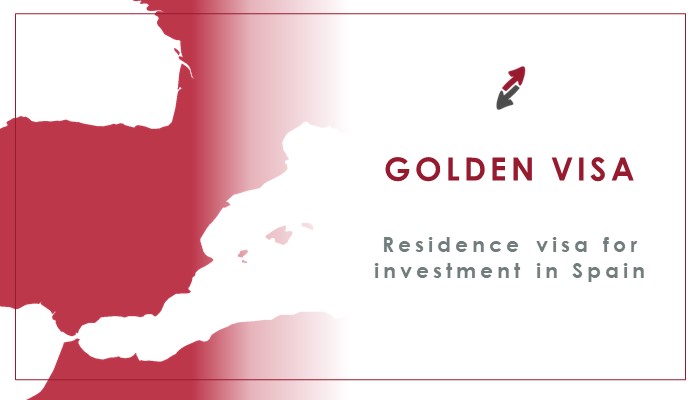 In the same manner as occurs in some of our neighboring countries, non-EU citizens can obtain a visa or authorization of residence in Spain by investing capital in our country.

Extensively, this measure was first introduced in the context of the economic crisis of 2008-2014 by Law 14/2013, of September 27, to support entrepreneurs and their internationalization, yet for the purpose of attracting the investment and talent of foreign citizens.

Additionally, although it is true that the so-called “Golden Visa” is not free of controversy, from its appearance, a multitude of citizens from diverse states have benefited from it. This has enabled the obtainment of a visa or residence authorization not only for the investor, but also for his family, under substantially more beneficial conditions than the customary ones.

ADVANTAGES OF THE “GOLDEN VISA”

The major advantage of obtaining a residence visa for investment in Spain, as opposed to other methods, is the possibility of its conservation independently of the time of permanence of the beneficiary in the national territory. In this respect, the regulation that governs it enables its renewal even in those cases in which there are absences of more than six months per year.

Further, the second factor in which the interest in the “Golden Visa” is rooted is that it entitles the investor to reside in Spain accompanied by his family, thus avoiding the phenomenon of family dispersion that usually characterizes and hinders international travel. In this sense, it is possible to obtain the residence visa for the spouse and children under 18 years of age, or adults who are objectively unable to provide for their own needs due to their state of health.

Likewise, this visa confers its holders the right to travel to any of the 26 countries that are part of the Schengen area without the need for any additional formalities.

To conclude, it is worth mentioning the agility of its processing, being its maximum term of resolution of 20 days, and the application being deemed to have been accepted by administrative silence if no express resolution has been issued within that said term.

REQUIREMENTS FOR OBTAINING RESIDENCE VISA FOR INVESTMENT IN SPAIN

The fundamental prerequisite for obtaining the “Golden Visa” is the realization of a significant capital investment in Spain. The investments which are considered to be significant are divided into three types according to their purpose, also differing in their conditions:

In order for the investment in financial assets to be classified as significant and, therefore, suitable for obtaining the “Golden Visa”, it must have a value equal to or greater than one of the following figures:

Finally, investments in business projects to be developed in Spain are classified as significant, provided that they are considered and accredited as being of general interest.

For the project to be considered as such, one of the following requirements must be met:

With regard to the investor, it should be noted that this concept is not limited only to individuals, but also covers legal entities, as long as the latter meet the following conditions:

Other than the above, with object to obtaining a residence visa for investment in Spain, it is necessary to prove compliance with the following general requirements:

In conclusion, obtaining a residence visa for investment in Spain is a faster and simpler way for those interested in making a substantial investment in our country. It is precisely this ease of obtaining and maintaining it that has led to a large number of people having already benefited from it, as has happened in countries such as Portugal or France.

By the same token, in an attempt to adapt your case to the regulations and make the process as smooth as possible, it is indispensable to have lawyers who are experts in Golden Visa and obtaining residency by investment, both in Spain and abroad. You can contact our team of lawyers here.